TETRA is well established in Africa and is helping governments address their many security issues. Sam Fenwick looks at recent developments in this exciting market, with a focus on South Africa

TETRA is well established in Africa and is helping governments address their many security issues. Sam Fenwick looks at recent developments in this exciting market, with a focus on South Africa 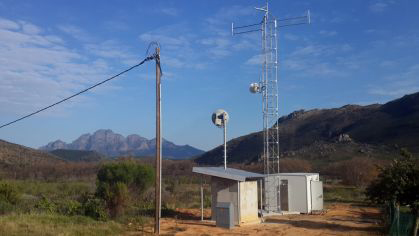 Boaz Or-Shraga, director of sales SSA for Motorola Solutions, sees two trends driving the uptake of TETRA in African markets: the migration from analogue to digital and the increased need to protect against crime and terrorism. He adds that the latter is becoming more and more significant and increasing the perception that “robust advanced digital communication is a must”.

According to the Institute of Economics and Peace’s 2015 Global Terrorism Index, Nigeria-based Boko Haram was responsible for 6,644 deaths in 2014. The number of casualties from terrorism in Nigeria in 2014 was up more than 300 per cent from 2013. 2014 saw Cameroon, the Central African Republic, Somalia, South Sudan and Yemen all experience the highest levels of terrorism in their histories.

To add to the present woes, two long-term issues are expected to make terrorism an even larger thorn in Africa’s side: demographics and global warming. According to the World Bank about 60 per cent of South Africa’s unemployed are between 15 and 34 years old. Should economic growth in the region slow it could lead to rich pickings for terrorist recruiters, though the correlation between youth unemployment and terrorism is weaker outside of OECD countries. The IMF sees Africa’s relative youth as an opportunity, saying that it will provide “a potential source of comparative advantage in abundant labour”. It predicts that by 2035 the number of sub-Saharan Africans reaching working age will exceed that of the rest of the world.

According to Climate change – a risk assessment, which was led by Sir David King, the UK foreign secretary’s special representative for climate change, “On a high emissions pathway, the incidence of extreme drought affecting cropland could... triple in southern Africa, over the course of the century under central estimates”.

Given the continent’s dependence on agriculture and the potential for migration as people seek to escape affected areas, this poses formidable challenges for the region.

However, these challenges – daunting as they are – are not denting Africa’s ambitions. At a recent industry event held in Cape Town it was clear that its countries’ governments want to be seen as world leaders in their application and adoption of technology.

Or-Shraga says that his customers in the region are looking into broadband applications and hybrid TETRA-LTE networks “more and more”.

Johan Hoolsema, managing director of systems design and engineering consultancy ESS, says: “There is a growing demand in the South African market to include LTE in conjunction with TETRA for wide bandwidth critical data communication. The main constraint being experienced with LTE in this regard is one of cost and shortage of suitable frequency bandwidth allocation.”

The City of Cape Town’s technical staff say that it is aiming to “replace the TETRA network in the future with higher data capabilities and install a 4G or LTE network. However, this needs to be planned and funded and a phase in phase out approach is required. It is foreseen that the TETRA system will be required for at least the next 10 to 15 years and therefore needs to be kept reliable and maintained.”

Or-Shraga has seen a slowdown in demand from Nigeria and Angola “due to the oil prices and the regime change in Nigeria”, but has not observed a decline in interest from the region caused by the drop in commodity prices. “The need is still there and has even increased...”

However, Felix Zheng, Hytera’s deputy director for east and west Africa, says that the drop in commodity prices is affecting the awarding of TETRA contracts. That said, “clients’ demand is still there, they [still] need to solve their problems with misson-critical communications equipment. But budget limitations are driving them to reconsider their suppliers.”

Or-Shraga sees South Africa, Nigeria, Angola, Botswana and Senegal as the African countries with the most potential for TETRA growth. Zheng broadly agrees: “South Africa is still one of biggest PMR markets in sub-Saharan Africa. Besides it, the markets in Nigeria, Angola, Ethiopia, and Congo have been growing quickly in recent years.”

“The South African market has been relatively active during 2015 with various RFI’s and RFP’s being issued for TETRA critical communication systems and system upgrades,” adds Hoolsema. “The main activity was in the oil & gas, mining, safety and security, and parastatal sectors of the economy.”

ESS was involved in several major projects in South Africa during 2015 for Sasol, an international integrated energy and chemicals company, and Anglo American Sishen Iron Ore Company. Sasol has two locations in South Africa (Secunda and Sasolburg) that use TETRA mainly for voice and also for SCADA applications. ESS engineered and supplied a large TETRA system expansion to increase the capacity of Sasol’s network. It also engineered and supplied additional telemetry/telecontrol systems for SCADA using TETRA data services.

“We expect that around 14,000 to 15,000 radios were shipped into the South Africa region in 2015, with the completion of the Gauteng TETRA system,” says Elizabeth Mead, senior analyst at IHS. The system was installed by Altech Alcom Matomo and covers the entire province. It uses 64 base station sites and caters for up to 30,000 mobile and portable radio units. The system incorporates AVL, mobile data and voice logging facilities.

“The vast majority of TETRA terminals shipped into the region were for public safety, although in the future there will be increasing TETRA terminal volumes in the transportation market,” Mead adds.

When asked to what extent ‘cost-optimised’ technologies have impacted on TETRA’s position in the African market Mead says that they will fare well in a number of countries, “primarily because of the cost-efficient price point”. “As such, we expect that there is some price pressure on TETRA that may result in TETRA becoming a price-competitive product in the region.”

In December 2014 Altech Alcom Matomo announced it had completed a TETRA system for Namdeb Diamond Corporation, a joint venture between the Namibian government and De Beers. Some 10 months after the implementation finished the network performance report revealed availability of 99.999 per cent. The completed system consists of 13 remote TETRA sites spread throughout the mine, one central switching office, two microwave link sites, three emergency control centres, one network control centre and 1,500 two-way radio users.

Turning to Nigeria, Briscoe Technologies operates a Hytera-supplied TETRA network that mainly covers the cities of Lagos, Abuja and Port Harcourt. According to a Hytera statement at the end of 2014, the network has more than 10,000 users. Phase 2 of the network’s rollout, which took place in 2015, extended it to cover most of the Niger Delta region – where the oil & gas industry is located – along with the Federal Capital Territory surrounding Abuja.

“The TETRA system has been rolled out and around 30 sites have been deployed so far, to cover Nigeria’s main cities,” says Zheng. “Its clients are from the oil and gas sectors – they, together with governments, transportation, and security companies are benefitting from the reliable communication it provides. We expect to further extend the network and introduce more value-added features in 2016.”

Weighing in on the argument between proponents of proprietary technologies and those in favour of their standardised counterparts, Or-Shraga says that one of the biggest African police forces conducted its own research using an independent consultant to determine the most appropriate mission-critical communications technology. The consultant was very clear in its conclusion that TETRA was the right choice for the police force.

“Clients in Africa need to solve their practical challenges with mature approved technology,” says Zheng. “Solving their voice communication challenges should always be the highest priority...”

Clearly Africa is continuing to adopt TETRA to meet the mission-critical needs of public safety and utility end-users. The region’s youthful demographics are both an economic opportunity and a threat to stability, but either way the demand for secure, reliable and standardised radio communications is likely to benefit.

Cape Town’s TETRA network: a case study
In 1996 the former Cape Metropolitan Council realised it needed an integrated radio communication system to serve all the citizens of the new UniCity, which consolidated seven  municipalities into one. Following an in-depth technical and financial feasibility study, TETRA was selected because of its status as the international standard for public safety communications in Europe.

In 2000 the City of Cape Town Motorola Dimetra TETRA trunking infrastructure was commissioned, replacing the obsolete and inadequate analogue systems used by the previous municipalities. The solution provides radio coverage over the Cape metropolitan area (CMA) and is owned and operated by the City of Cape Town.

The system was upgraded and expanded in 2008 to accommodate the 2010 World Cup’s communication requirements. A site was installed in the World Cup stadium and subscribers were issued to FIFA officials, local Organising Committee officials and all the City’s emergency and municipal services staff. It has been used during numerous events, such as responding to beached whales, serious mountain fires and the Two Oceans marathon.

Cape Town’s TETRA system has the capacity for 15,000 subscribers and currently accommodates 13,500 (11,000 from the city’s safety, security and utility services and 2,500 external users from surrounding municipalities). It was also designed to cater for peak usage, allowing TETRA users to communicate effectively during disasters and large events. It enables seamless inter-communications between all the city’s emergency services.

In addition, the system allows:

The city has acquired a pool of TETRA radios to be issued to politicians, senior management and key staff in the event of a prolonged electricity outage when it is expected that all other communication methods will fail. The TETRA network has its own dedicated microwave network linking the central master switching office (MSO) to all 32 remote repeater sites, all of which are equipped with 12 hours’ battery backup as well as generators with the capacity to run for three days.

Over the last 15 years the TETRA system has met the city’s requirements for performance, reliability, coverage and capacity and has not once failed or been found wanting in any of these areas. The average uptime of the system is 99.999 per cent and the average for all 32 remote sites in wide area is 99.5 per cent.

Motorola Solutions and radio distributor Altech Alcom Mateo upgraded the MSO in June 2015 to the latest version of Motorola Solutions’ TETRA system – Dimetra IP 8.2 – to allow for further expansion and to ensure a continued reliable and supported infrastructure.

“Investment in the TETRA system serves as an enabler for improved service delivery to the citizens of the CMA,” said councillor Xanthea Limberg, City of Cape Town mayoral committee member for corporate services, following the upgrade’s completion. “This is achieved by providing reliable and effective communications and improving interoperability and response times during special events, emergencies and disasters.”

The City of Cape Town is also planning to upgrade the 32 repeaters and and the dedicated microwave network over the next three to five years, to ensure that the network continues to meet the needs of the CMA’s public safety and utility organisations.