Swissphone's RES.Q terminal is a hybrid device which combines POCSAG and cellular technology. This maximises coverage and allows firefighters and operation directors to improve efficiency before, during, and after alerting

In an emergency, the right first responders must be mobilised as quickly as possible to protect lives and property. But while fire and rescue operations are becoming an increasingly professionalised service, fire crews in many countries rely heavily on part-time volunteer firefighters to sustain or supplement their efforts.

Radio pagers are widely used to summon these volunteers. Since the POCSAG digital protocol emerged in 1981 as an international standard, it has become the dominant radiopaging technology – in Europe alone there are about 10,000 installed POCSAG base stations.

With the move to digital radio networks for voice and data transmission, alerting tasks can also be handled via other technologies, such as TETRA, GSM or LTE. However, with these it may not be possible to provide the same level of alerting performance seen with POCSAG systems.

The importance of rapid and accurate alerting has been underlined by numerous recent events such as:

Such increasingly frequent events call for highly available, robust alerting networks and communication systems. These networks form a basis for effectively managing crises and emergencies during their initial phase.

Broadcast. Alerting networks are based on the broadcast method. A broadcast can deliver information to any number of users in a single operation. This method is ideal for simultaneously contacting almost any number of people. It virtually rules out the possibility of the network being overloaded. Classic alerting terminals – pagers – are usually designed solely to receive information. Nothing can be sent back in response to a received message, so the base station cannot be overloaded or blocked. One-way communication with POCSAG can be supplemented with a GSM module to send responses or status messages.

In contrast to POCSAG, cell-based TETRA and GSM employ a point-to-point approach: the base station addresses end devices individually – making them bottleneck-prone. Any sudden increase in users and data traffic in cell-based networks may overload individual base stations, creating long delays.

Low carrier frequency. In many countries, frequencies in the VHF range 136–174 MHz have been widely used for POCSAG alerting. This relatively low frequency band provides a greater transmission range than systems in the UHF bands. VHF signals are also better at penetrating obstacles such as house walls. Thus, in comparable circumstances, radio networks with a low operating frequency (such as dedicated alerting networks) require fewer base stations to deliver equivalent signal coverage than networks at higher operating frequencies (such as TETRA or mobile phone systems).

Resilience. It is crucial that the alerting network is constantly available and always works dependably. If component failure occurs, there must be a fall-back capability which allow alerts to still be sent. Alerting networks that are physically independent of public networks or Internet connections are more readily protected from events such as cyber-attacks or hacking. 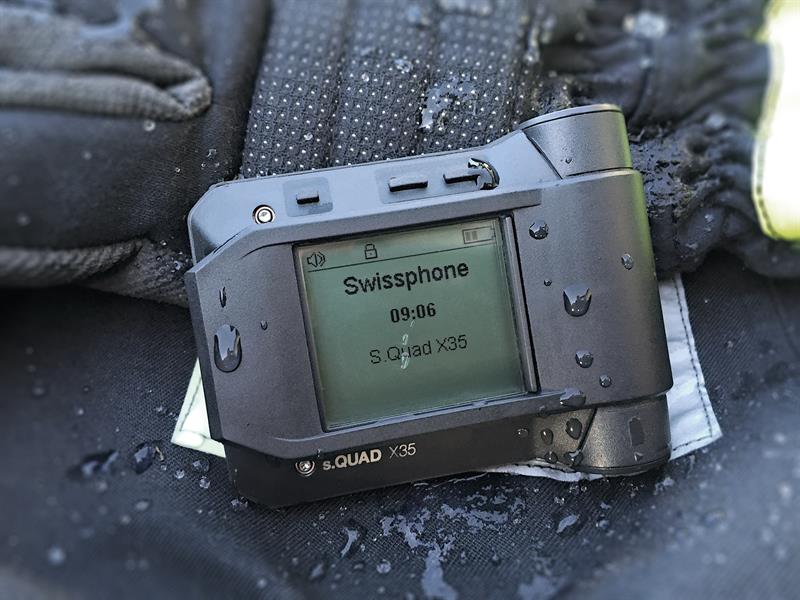 Redundancy. Alongside an alerting system (e.g. a POCSAG network), additional communication systems are used to provide voice (e.g. TETRA) and data exchange (e.g. LTE). If the speech radio network fails, the dispatcher can at least continue to transmit deployment orders and information to all or to individuals via their pagers.

In addition to system redundancy, value is placed on functional redundancy within the network. This includes comprehensive component redundancy (input system, network controller, main base station) as well as numerous operational fall-back modes (automatic call repetition, multiple transmission, automatic switching of the base station to over-the-air data input in the event of a failure of TCP/IP access).

User devices. In many communities, it is voluntary emergency response services which are called out to fires, accidents and other deployments. As they must always keep their alerting devices with them, these devices must be comfortable to carry, easy-to-use and robust. They should also be as sensitive as possible, so that they work even where network coverage is weak. Undelivered alarms may erode the user’s trust in the device. In noisy environments, the pager alarm must be loud and be supported by vibration and light alerts. Long battery life ensures that pagers does not need to be frequently recharged; and ideally they should be powered by ordinary batteries so that a dead one can quickly be replaced with one bought locally.

Another way of reducing costs would be to alert via commercial broadband networks instead, using apps. But doing so sacrifices resilience and redundancy, two indispensable public safety requirements.

Technical angles
Three main technologies – LTE, TETRA and POCSAG – can be used for alerting. Their physical and technical differences influence the link budget, which predicts the received signal strength at the end device, taking into account the transmitter's emitted power and the gains and losses of the transmission channel (see the table below).

Many factors govern the building penetration of radio waves. It is hard to generalise, but signal loss in modern buildings is about 5 dB greater with GSM (1800 MHz) than with TETRA (400 MHz) or POCSAG (150 MHz).

Many POCSAG pagers operating in the VHF range use magnetic antennas, fabricated as wire windings around a ferrite core or as a metal frame. These are especially suitable for devices worn on the body, such as on the belt. The magnetic field lines are deflected close to the body such that a gain of up to 6 dB is possible at around 150 MHz.

TETRA hand-held transceivers operate in UHF, so short spindle or rod antennas are used. These have no horizontal directivity and their gain is accordingly low. TETRA pagers typically have integrated frame antennas or short spindle antennas; these achieve a gain of only about 3dB in the optimum position, facing the direction of the transmitter.

POCSAG also gains an advantage from its simple bipolar FSK modulation scheme. In LTE and TETRA, several types of modulation are used, but the higher-order modes (up to 64 QAM for TETRA, up to 256 QAM for LTE ) require a greater signal-to-noise ratio to achieve a comparable bit error rate. Thus POCSAG receivers deliver more robust performance than those of other technologies.

If a TETRA pager rather than a TETRA radio is used for alerting, the link budget reserve is reduced by 6 dB because of the integrated antenna's poorer efficiency. To offset this and achieve the same reception quality, you would have to install four times as many base stations!

In comparison, POCSAG provides about 10 dB more reserve in the link budget than TETRA when used with TETRA pagers. A POCSAG base station thus delivers the same radio coverage as about ten TETRA base stations.

Evaluating the link budget, a calculation which is heavily influenced by the physical environment as well as technical factors such as radio frequency, transmitted power and modulation mode

Network architectures
The POCSAG standard has enabled manufacturers to develop a highly available network architecture for safety-related applications that works independently of third-party systems and is safeguarded by numerous fall-back levels. For example, even if a data feeder fails, the main base stations can continue to communicate directly with each other over the air interface. This line of communication remains open even if the control centre fails, or if some base stations are no longer in operation because of failure or attack. 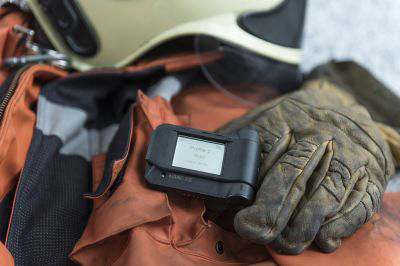 At a minimum, a POCSAG alerting network can function with a single IT data feed to just one main base station. In TETRA and LTE systems, each base station requires its own IT feeder, and thus the network depends critically on the integrity of these connections.

The most advanced POCSAG networks from Swissphone go one step further. Today, virtually any number of decentralised input points (e.g. at fire stations or community centres) can be coupled directly to the alerting network, making two-way communication via the air interface possible between the main control centre and the decentralised control centre.

Modern alerting networks also allow for network status feedback, whereby the transmission confirmation and the function state are transmitted via a dedicated radio layer for each base station.

Economic considerations
To understand why POCSAG alerting provides the most economical radio coverage of all technologies, we must consider the situation from the perspective of both the network and the end devices:

- POCSAG networks are best for ensuring comprehensive radio coverage due to their low carrier frequency, and because fewer base stations are required, as their end devices are more sensitive than those of TETRA and LTE.

- Because a wireless feed is integrated in a dedicated radio layer, POCSAG networks do not require a physical, wired data feed. This leads to large cost savings.

- POCSAG base stations are easily the most cost-effective option. A TETRA base station costs up to 30 times more, and an LTE base station up to 100 times more. A top-class POCSAG pager is two to three times cheaper than a TETRA pager or a medium-class smartphone. 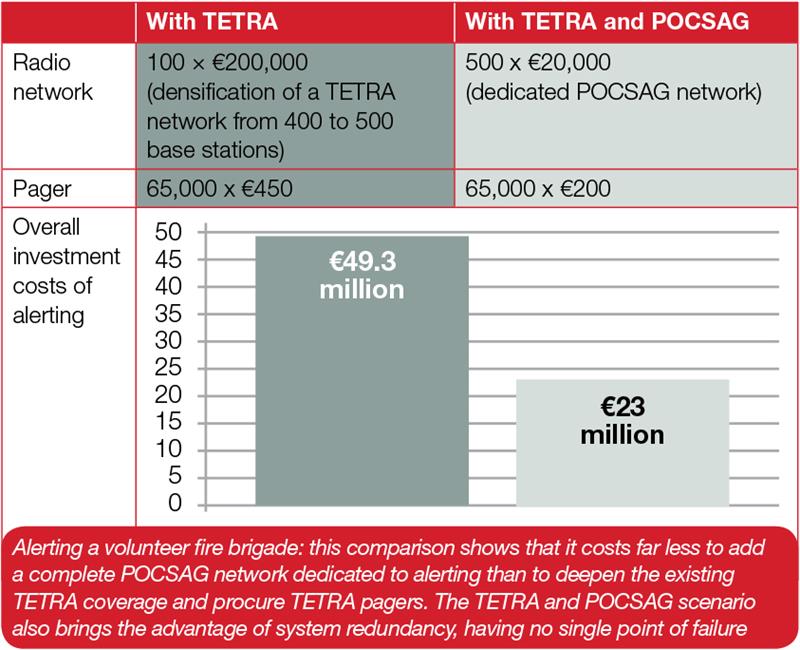 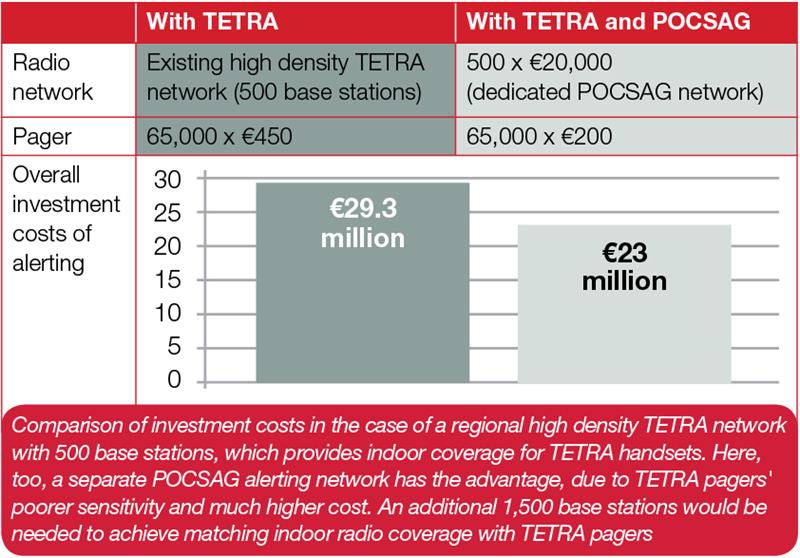 Hybrid approaches
Can these technologies be combined to deliver an even better proposition? Certainly, a dual system using TETRA for voice and data with an independent POCSAG alerting solution can offer significant technical and economic advantages. The cost-effective POCSAG alerting network can provide comprehensive radio coverage, while the TETRA network can be designed for less dense voice and data communication than would be necessary if alerting depended wholly on TETRA pagers.

Another option is GSM-capable POCSAG pagers. At a list price of €300–400, these are more expensive than conventional POCSAG pagers, but the recurring cost of the GSM feedback function amounts to €2–3 per month per device. These costs can be balanced against savings arising from use of the feedback channel.

For example, one small fire brigade in Germany, with 247 volunteers, has saved wage costs of €53,500 per year through its 125 two-way pagers, which reduce unnecessary over-alerting by allowing volunteers to give timely feedback. This reduces the compensation which the municipality must pay to employers when they release staff for fire duty. The net benefit from the feedback channel pager amounts to €36,000 per year.

Future prospects
Whenever the greatest possible number of emergency response forces must be alerted quickly and safely, we have shown that POCSAG is the best solution, both technically and economically. Because of the end devices's outstanding characteristics, POCSAG alerting is perfectly suited to forces' day-to-day demands – much more so than TETRA pagers or LTE smartphones.

With its unique characteristics, its well-established frequency assignment and the continuing development of its alerting and communication solutions, as well as its user-friendliness, POCSAG offers a solid proposition for users, both on its own and when coexisting with TETRA and public safety LTE infrastructure.

This article is based on a new white paper from Swissphone exploring the potential of the three radio technologies for alerting. It is available from www.swissphone.com/tfoa