It may sound like a conjuring trick – but Iowa-based radio supplier RACOM Corporation is offering fire departments a hybrid P25-based radio recipe which provides enhanced alerting performance at less than the cost of beefing up the P25 network to deliver equivalent coverage. Such systems are now being installed or undergoing final testing in three counties of RACOM’s home state, and others are expected to follow soon elsewhere.

RACOM’s calculation hinges on the need to muster volunteer fire crews scattered across these largely rural areas. For alerting them wherever they happen to be, a personal pager is convenient and is the natural choice – but it is a critical, vital component in the system. “Fire paging is probably more important to volunteer firefighters than the voice radio system is”, comments Terry Brennan, vice-president of RACOM. “If they don’t get their alert or page, then they can’t even show up.”

P25 pagers’ poor reception
As a supplier of P25 networks, RACOM can offer P25 pager alerting instead. However, in outdoor tests, its engineers found P25 pagers to be disappointingly insensitive compared with P25 handheld radios. “We were able to receive voice radio traffic at 10 dB advantage over getting our pager to alert successfully”, Brennan explains. “If I do my propagation study and I add 10 dB of loss, my portable coverage would be horrific. And whether it’s 10 dB or 8 dB or, heck, if it’s three dB, that is the difference about whether a volunteer fireman gets his page.”

So instead of expanding the P25 network to support indoor pager reception, RACOM recommends overlaying it with a separate digital alerting network built with technology from the paging systems manufacturer Swissphone. According to Swissphone, this paging package can amount to as little as five per cent of the cost of the complete P25 project. 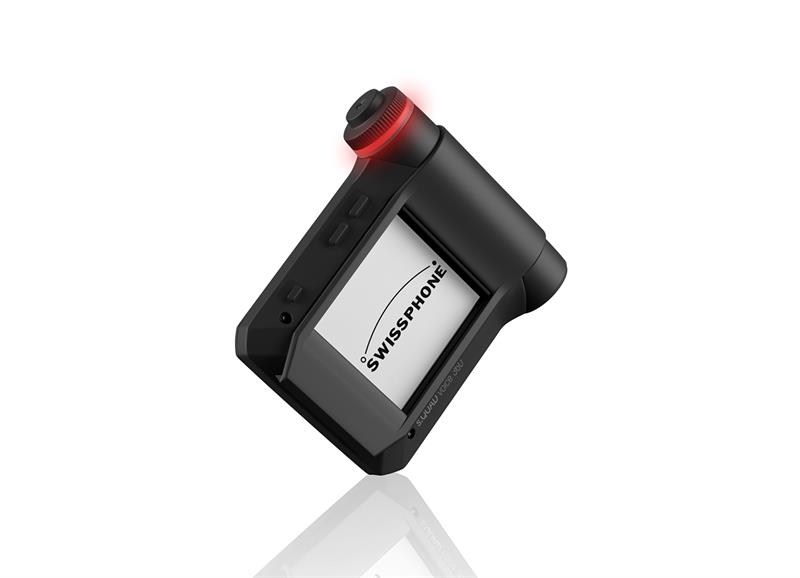 Swissphone’s rugged and highly sensitive (2µV/m) s.QUAD Voice 360 pager is newly available for the US with a handy knob for controlling volume and selecting profiles. With a free firmware upgrade, the s.QUAD can be transformed into a full-featured digital text message pager operating on the proven POCSAG standard. In this way, fire departments can spread costs by replacing their old voice pagers ahead of their switchover to digital. At a fraction of the cost of P25 devices, the s.QUAD will further save expense as lost or damaged pagers need to be replaced during the lifetime of the network. In place of daily recharging, the s.QUAD can be powered for up to 180 hours by a single AA dry cell, and it has Low Energy Bluetooth capability for integration with smartphone apps

A convincing solution
In Black Hawk County, where the first of these systems is being commissioned, each of its five P25 radio sites is equipped with a Swissphone DiCal paging base station, operating on UHF to achieve the best building penetration. All these sites are linked by a microwave ring, but the DiCals units can also communicate with one another independently, over the air.

“If the county grows or has some new buildings where they have problems with coverage, with DiCal it is very easy to add an additional base station”, says Marco Stadler, managing director of Swissphone North America. “They don’t need any backhaul access to that base station – they can literally place a base station on a fire station’s roof and the other base stations will talk over the air with this additional base station. There’s no complex need to integrate the base station to expand coverage if needed later on.”

Furthermore, while P25 paging allows the user just one opportunity to receive an alert, with Swissphone’s DiCal technology each message is retransmitted across the network in phased sequences, allowing a receiving device multiple opportunities to catch it from different sites at staggered times. 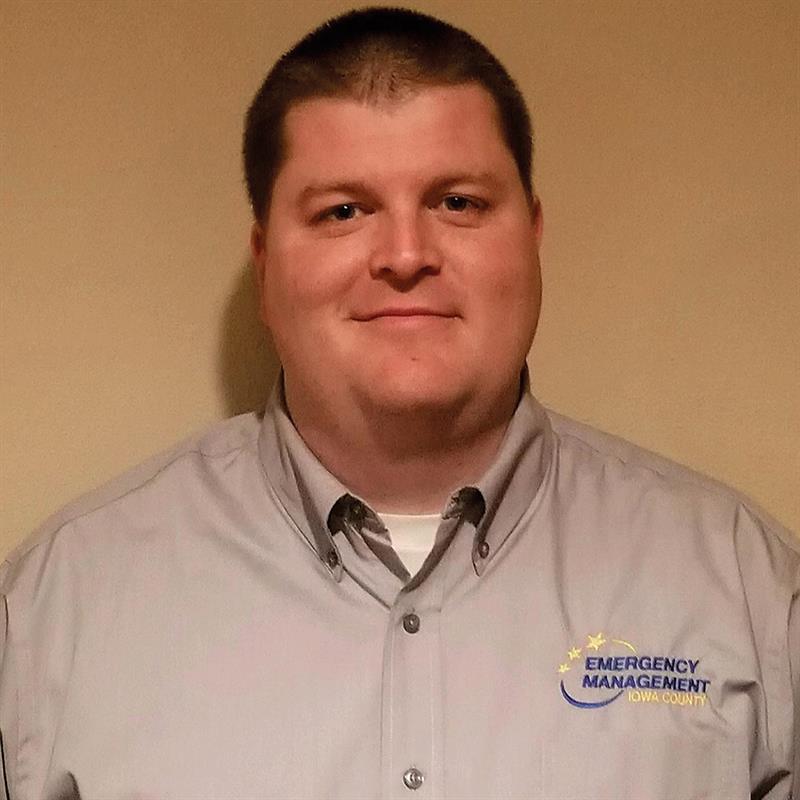 “Iowa County chose the DiCal solution as a complement to our Harris P25 800 MHz Phase 2 land mobile radio system due to coverage, cost and reliability”, says Josh Humphrey (pictured above), who is responsible for emergency management at the Iowa County Sheriff’s Department. “Cost of this system was hands-down less expensive than updating our existing tone-voice system. The DiCal system afforded us the ability to do a complete update with all infrastructure and terminal user equipment at half the cost of what traditional tone-voice infrastructure would have cost. RACOM and Swissphone have been excellent vendors to work with on our LMR project and paging system upgrade”

Standard-compliant
With a dedicated paging system, fire departments can immediately comply with the NFPA 1221 requirement to maintain separate systems for communication and alerting – a stipulation which cannot be satisfied by an all-P25 installation or by an alerting app relying on fragile cellphone coverage.

In addition, the Swissphone technology offers an easy upgrade for counties which are not yet ready for P25 but are struggling with the legacy of narrowbanding, which weakened the coverage of their tone-voice paging transmitters: Offering the industry’s best sensitivity,Swissphone’s s.QUAD Voice pager will alert your volunteer firefighters reliably in areas where your old analog pagers simply don’t work. It thus maximises the reach of your existing analog network. When the time comes for the county to upgrade to digital, the s.QUAD Voice becomes a digital pager with a simple firmware-update. The s.QUAD Voice pager thus offers excellent protection to your investment. 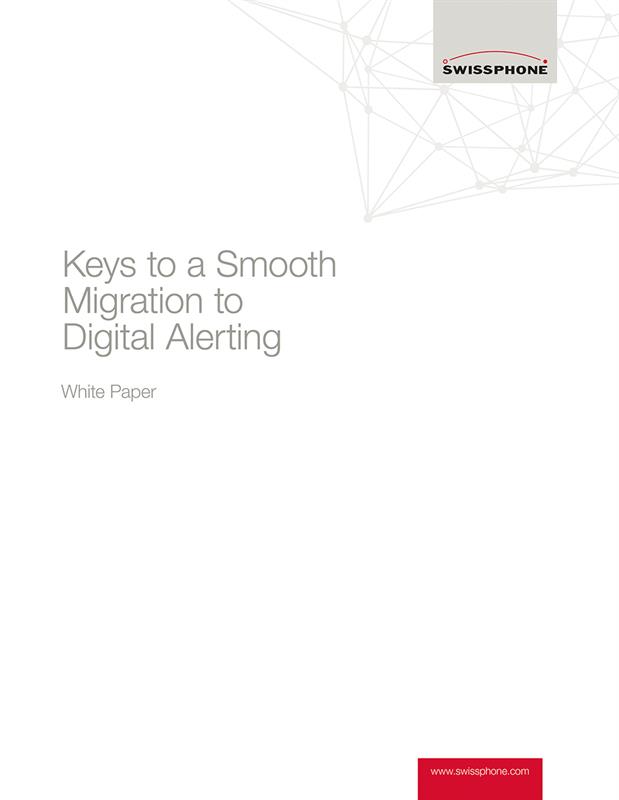 “Our DiCal solution is pretty flexible in terms of bringing coverage where it’s needed”, says Marco Stadler. “Instead of just having a high-powered site and going out with 500 watts over the whole area, it’s more dedicated, like a cellular network with multiple sites and better indoor coverage and penetration and so on. With digital alerting – we do it all over Europe – we are sending an encrypted, secured text message to the pager instead of a voice call.”

Terry Brennan concedes that there could be P25 projects where paging coverage is less of a constraint. “But I think you will probably find 10 applications where DiCal is much better for every one that is going to work well on P25”, he says. “I think the problem is people will try P25; it won’t work good enough for them, and now they’re stuck with it.”

He adds: “If you stick the pager and the portable radio on the table and you say, ‘Which one’s going to get better reception?’ –well, you look at the antenna and you know the answer. I think that’s a fear which is going to take a lot of firemen away from P25 paging, if it’s brought to their attention.”

The s.QUAD voice pager provides a quick fix for coverage issues with an existing analog network. When the time comes to move to digital, the s.QUAD Voice becomes a digital pager. Get the whitepaper at: http://bit.ly/swissphone_whitepaper