Public sector cuts since the financial crash of 2008 have placed a real strain on emergency services. The Fire Brigades Union has lost 20 per cent of its funding and there are 10,000 fewer firefighter jobs since 2010, while the police in England and Wales has 18,000 fewer officers now compared with in 2010.

As a consequence of reducing budgets, IT teams in these sectors have been forced to retain legacy technology in a bid to reduce costs, often keeping old systems functioning and integrating mixed estates.

Impact to the control room
These bigger challenges to the emergency services inevitably impact on the operations of their critical control rooms. For example, police control rooms have felt the effects of forces’ budgets dropping by as much as 20 per cent in the five years between 2010 and 2015*, despite the evolving threat of cyber attacks and an increase in 101 calls.

Finding a solution
In response to these challenges – that is, restrained budgets and increasing demand – the emergency services have started working smarter by taking advantage of the latest technology, enabling effective and efficient service delivery.

One example is APD’s creation of cloud-based control room solutions that are flexible, scalable and, most importantly, don’t require large capital investments. APD Communications is at the forefront of creating this cloud-based solution.

A journey of crucial innovation
Two years ago, the company began a journey in reducing proprietary hardware in favour of open-standards software, and in 2016 APD launched the world’s first hosted control room solution in Sweden. This innovation was crucial in preparing for the new Emergency Services Network (ESN); a 4G mobile network that the emergency services will use to replace the costly Airwave TETRA network.

The company has gone on to develop its fully hosted control room solution, a cloud-based data and communications platform that offers benefits including cost savings, greater flexibility and improved security.

Mike Isherwood, Managing Director at APD Communications, said: “Technology is a big enabler when it comes to doing more with less. With fewer people, the emergency services have to look for look for efficiencies in how they operate. Technology can provide those efficiencies, but it has to be cost effective. Cloud computing is at the heart of this, providing organisations with a much smaller and manageable infrastructure footprint, as well as affording them the flexibility to only pay for what they use.”

“Centralising technology in the cloud means access to the latest technology and features, easily flexing up and down with demand, and managing the way you work from a secure online portal. This is instantly more cost effective and efficient for both the supplier and the customer.”

Security and reliability
The benefits of cloud-based services are not only financial. With hosted control solutions, the headache that comes with upgrades are a thing of the past. Managed in the cloud, upgrades are seamlessly rolled out to the control room without any downtime.

There’s also unrivalled security and reliability thanks to UK Cloud, a dedicated cloud-provider to the UK Public Sector that ensure APD’s solutions are optimised for OFFICIAL and fully aligned to the 13 NCSC Cloud Security Principles.

Mike explained: “The cloud is an important asset to the emergency services. As well as its low cost, it is more secure and scalable, easier to manage, and they can take advantage of the latest technology quickly.” 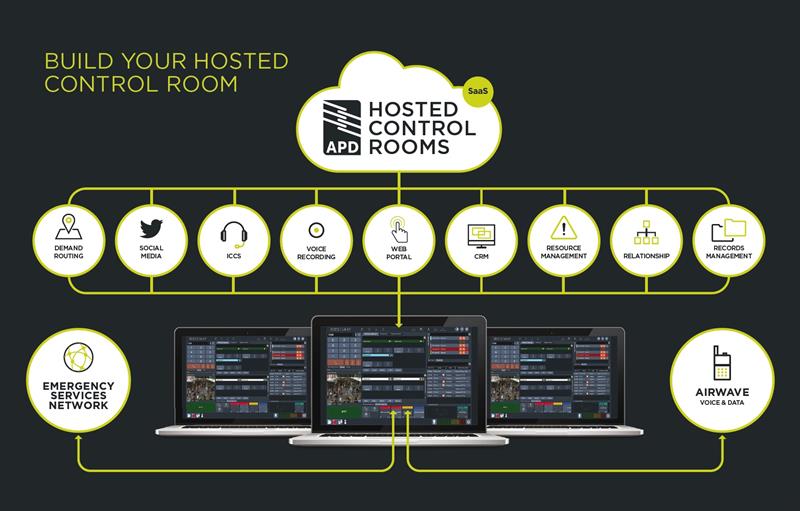 Why do the emergency services want to go hosted?

"A hosted control room solution has many benefits for us. First and foremost, it enables us to get access to the latest features and updates with minimal interruption to our local server rooms, as soon as they’re available.

Choosing to host our control room is also reducing the complexity of our HQ relocation in the next two years. Using the cloud, we won’t need to move hardware, which is hugely beneficial in a critical communications environment." – Gwent Police

A new approach to collaboration
“Public safety organisations are now becoming much more comfortable using cloud-based technologies, which I think will free things up considerably. In terms of the feedback we get, the most important thing for them – alongside security – is that the servers are in-country and that they own the data. There has to be a host of disaster recovery plans in place as well.

“Ultimately, what we’d like to see is a national platform allowing different organisations to share information between each other according to local agendas. For instance, a police force in Yorkshire could receive a message saying that the Metropolitan Police Service would like to access a particular record, which they could then accept or deny. They all need different applications and technologies, but that doesn’t mean they can’t share a national platform.”

“As a UK-based development company, we will continue to gather new requirements from our customers. We are working closely with the Home Office to produce the latest technology too, and we are looking for joint development partners within the emergency services so we can continue to develop world-leading technology.”