Richard Lambley looks into the technologies used for providing interior communications, with an emphasis on TETRA

In the 21st Century, celebrations to mark the new year have evolved into a global spectator sport, with major cities around the world striving to outdo one another as they dazzle residents, visitors and TV cameras with spectacular midnight shows. Alas, one of the biggest of this year’s firework displays, centred on the Burj Khalifa in Dubai, the world’s tallest building, was entirely upstaged by a huge blaze that broke out during the evening just a few hundred metres away. In a matter of minutes, The Address, a 63-storey hotel and apartment complex, was engulfed in flames and raining burning debris on to the ground below. It took close to 24 hours to extinguish all the flames.

The Address hotel in Dubai, ablaze on New Year’s Eve

No lives were lost, although panic ensued in the building as residents and hotel guests raced to make their escape. Yet the incident provides a dramatic reminder of the need for dependable emergency communications in large and densely occupied buildings, both for the public’s reassurance and for the search and rescue forces, which may be called in to mount life-saving operations.

Commonly, the need for an in-building radio coverage installation begins with public safety and, indeed, with larger buildings, some city authorities already refuse to grant a building occupancy certificate until a suitable system is in place. Moti Shalev, of Cobham Wireless – which has supplied many in-building projects around the world, including a TETRA coverage system for the Burj Khalifa – explains that some authorities, such as in the US, strictly enforce their rules for both new and renovated buildings, and for associated areas such as underground car parks. “Say you are the building owner and you want to get an occupancy permit for the building or to renew it, then it is an opportunity for the municipality now to enforce these regulations,” he says. “Think about it, it’s very tough: you are a building owner, and now you need to shut down your building because you don’t have a coverage solution.”

Standing 828m high, the Burj Khalifa building is an icon of Dubai’s economic growth. Housing business as well as residential elements, it required in-building TETRA coverage to a very high standard to protect its occupants.

The Burj Khalifa’s TETRA network makes use of the fibre backbone installed during construction of the building. The network is based on a fully customised fibre repeater design with duplicated fibre distribution to two master sites and seven optical remote units.

Another system provider, CommScope – whose deployments in Dubai include a large TETRA system for the airport operator, under its Andrew brand – has had similar experience. Samuel Buttarelli comments: “It’s worth knowing that in some countries – Germany, but also the Netherlands – it is the responsibility of the building owner to make sure that TETRA coverage is guaranteed. In other words, the building owner is responsible to make sure that when the police or fire brigade or whoever comes on site using TETRA, they can communicate.”

Small sites, big sites
Technologies employed in in-building installations can range from a simple off-air relay bringing a signal in from the outside to an elaborate distributed antenna system (DAS). Buttarelli’s team has supported projects of all types, ranging from repeaters providing road tunnel coverage for Norway’s Nødnett public safety network, to an extensive system based on radiating cables for the Moscow Metro, to a big project in New York City where the World Trade Center buildings destroyed in 9/11 are being replaced. “The size of the building really determines which type of solution you will have,” he says. “It’s going to be a BDA [bidirectional amplifier] for the small buildings, but for the big buildings that’s not a solution, so you need to go with fibre-optic DAS.”

While public safety radio is frequently the driver for a project, it may be advantageous to include mobile phone coverage at the same time, for business and personal use. In tall buildings without such a system, users’ phones may become confused at seeing too many base stations outside, and service quality may plummet. “If you think about a tower of 40 or 50 or more storeys, without a dedicated system you will see 20 or maybe 50 sites from there, and then you will have a lot of dropped calls,” Cobham’s Shalev explains. “You log into one site, then you have interference and you log into another site and you have dropped calls – you cannot really make communications! That’s why you need to have an in-building dedicated system. It needs to be the dominant signal within the building.”

One case he cites is Western Europe’s tallest building, the Shard in London. “They wanted to have public safety coverage. But then our sales team asked them, ‘Have you thought about cellular?’ They were convinced very quickly, and they have also got our cellular solution there.”

Yet the requirements of public safety and mobile phone networks may conflict with one another. “There is a basic and fundamental difference between commercial and TETRA,” Buttarelli points out. “When we talk about commercial systems, we talk about capacity. We need to provide a lot of data to work smartphones and all these type of devices. But when we talk about TETRA, coverage is critical.

“Just to put some numbers behind it, when typically we design for commercial systems in venues like shopping malls, airports, underground, we typically target 95 per cent as the coverage target. What is left out, the five per cent, is typically areas of the venue like service rooms, IT rooms, emergency exits. But guess what? In TETRA, the coverage target is 100 per cent, and the five per cent that is left out from the commercial system is actually the most critical part of the TETRA coverage!”

Design aims
While in-building systems for TETRA and cellular phone networks may be quite similar technically, the design targets and, of course, the actual users are distinctly different. “There are some countries in Europe where sharing the infrastructure is actually forbidden by law,” Buttarelli continues. “Germany is a typical example.”

In other jurisdictions, there may be pressure to reduce costs by sharing at least part of the in-building infrastructure. This is because TETRA is increasingly used within the enterprise, and there is also a strong interest from authorities such as the police to expand TETRA coverage even into smaller venues. “Ideally it would be good to try to share if it is possible by law”, says Buttarelli. “But unfortunately it is not always very efficient to do that. TETRA is typically in the 400 MHz band and LTE in 2.6 GHz, and the planning is very different. And, secondly, there is of course a very strong requirement in terms of availability and reliability of the signal. In other words, there is a lot of redundancy that you need to build into your network because you cannot afford to have any interruption of the service. So the short answer is that it is very difficult to reconcile. There are some attempts, especially in the smaller venues, but still the two infrastructures, at least in Europe, tend to be separate.”

In larger modern buildings, fibre cables are normally laid during construction – which is convenient, because opening up ceilings afterwards to run cables can become a major factor in the cost of a system.

In such buildings, the fibre DAS centres on an optical head-end or master unit. Shalev explains: “This is basically a unit that can get the capacity either from the TETRA base station or LTE base station or whatever you want, and it can do a conversion – take the RF, modulate the RF and convert it into light that is running in the fibre-optic cables. Then it goes on the fibre-optic cable – and the good thing is that this fibre-optic cable can carry the light up to, let’s say, 20km. We have a new platform of digital technology which is enabled to 80km, but you don’t need that in-building.

“And then, on the other side, it goes to a remote unit which does the opposite conversion. There are solutions for, say, a single frequency band, but also for dual-, tri- and quad-band and even more so.”

To reach the goal of 100 per cent TETRA coverage, specialised software tools may be required. “For a tunnel, it’s not really much needed,” comments Buttarelli. “You just make the calculation according to the propagation loss that you have along the cable, so that you have enough signal strength. But in a type of environment like an airport or a large shopping mall, the design of the system is a bit more sophisticated. We start from typically a 3D model of a venue and we have some specific tools so that we can do a full 3D simulation in terms of propagation and coverage to make sure that we can guarantee, even before the installation starts, that we can achieve a certain type of coverage target.”

But although the technology for in-building radio is generally well established, Shalev warns that public safety users are always a special case, requiring customised or non-standard products in their systems. “What happens if my fibre-optic cable is cut?” he asks. “So you need to have redundant solutions. What happens if my power supply fails? OK, you need to get a redundant power supply in your box. What happens if my power amplifier fails? OK, you need to have another power amplifier.” Furthermore, some customers want rack-mounted equipment, while others want it wall-mounted. And some demand equipment with fanless cooling, for increased reliability. “So, you see, there’s a lot of requirements that can vary from customer to customer, project to project.”

Fibre beneath the Alps
Now undergoing test runs in preparation for its formal opening on June 1, 2016, the 57km Gotthard Base Tunnel is the world’s longest railway tunnel. It is the key link in a new, high-capacity north-south route, with trains running at speeds up to 250km/h. For train-to-trackside communications, CommScope’s Andrew division has supplied Distributed Antenna System (DAS) radio coverage based on its fibre-based Ion-M optical distribution technology. Besides supporting GSM-R radio for railway operations and TETRA for the emergency services, the multi- band system also carries mobile phone coverage for the travelling public. With more than 600 optical repeaters and 150km of radiating cable, it covers the two main bores plus an additional 43km of service and access tunnels – 153km of wireless coverage in all. A particular challenge in implementing the system was to achieve reliable cellular hand-offs as the trains speed through the tunnels. 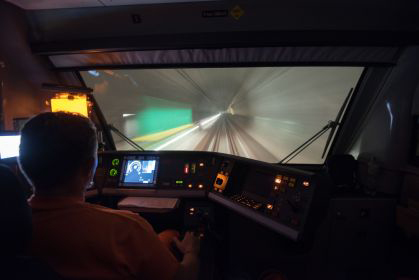 A first test run through the soon-to-be-opened Gotthard Base Tunnel in Switzerland: the line is supported by an advanced tunnel radio system

Radio manufacturer Sepura has announced the launch of its first-ever TETRA radio to operate in very high frequency (VHF).

The Ministry of the Interior of the German state of Bavaria has agreed a deal to acquire 55,000 ADVISOR TPG2200 TETRA two-way radio pagers from ...