Bravo, the mission-critical operator arm of Saudi Telecom Company (STC), is establishing a TETRA network in the Western Region of The Kingdom of Saudi Arabia to cover the Holy Sites, Makkah, Madinah, Jeddah and Yanbu. This is part of the company’s plan to provide vital sectors in the region, with the most secure and reliable TETRA solutions, which can be developed to benefit from future advanced critical communications technologies.

Dr. Fahad Bin Mushayt, Bravo’s CEO, said that the first stage of construction of the network is underway. In this phase, 84 sites equipped with modern TETRA infrastructure will built prior to the Hajj season. So far 50 sites have been completed. This year will be the first time that Bravo’s TETRA network will be used during the Hajj season.

Bin Mushayt confirmed that Bravo has started establishing a TETRA network in the Western Region because of Makkah and Madinah’s great strategic importance. The Makkah Region’s total population is 8.34 million while Medinah’s is 2.1 million. Each year more than 15 million visitors are hosting by the KSA during the Umrah and Hajj seasons. 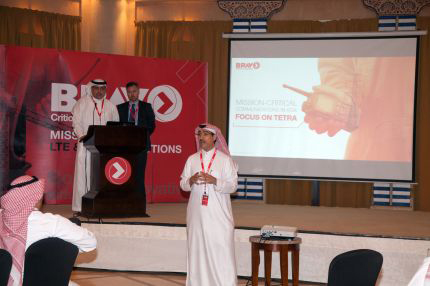 The Government of the Custodian of the Two Holy Mosques has paid great attention to the region. The Saudi Vision 2030 stresses the need to allow as many Muslims as possible to perform Hajj and Umrah and enable them to visit the Holy sites in the best possible way, and to enrich and deepen their experience through the correct preparation of the two Holy Mosques, as well as creating tourist and cultural sites, and providing the best services before, during, and after their visit to Makkah, Madinah and the Holy Sites. Critical communications play a key role in ensuring the safety of pilgrims and the smooth running of crowd management processes, while bringing together all concerned authorities with public safety, health, transport and other vital sectors under one umbrella.

The Bravo TETRA network targets many customers in the public and government sectors in many fields including transportation, health, Hajj, basic utilities and the energy sector, as well as the various security agencies. As Yanbu Industrial City is of great importance to the Kingdom’s oil and gas industry, it is completely covered by the Bravo TETRA network.

Yanbu Industrial City is strategically located on the Red Sea coast and due to its proximity to the Suez Canal, North Africa and Europe. It is located between Africa and the Far East. It represents the western endpoint of crude oil and natural gas pipelines extending from the eastern part of the Kingdom to a distance of approximately 1,200 km. A portion of the crude oil is exported to international markets. The other part is used, along with natural liquid gas, for petrochemical industries in Yanbu Industrial City.

Seeing the strategic importance of the Eastern Province of Saudi Arabia, which includes major oil and gas companies, and these giant companies’ need for encrypted communication systems to run and manage their work groups with flexibility and security, Bravo plans to establish a TETRA network in the Eastern Region in the next phase, as per its customers’ requests.

On the other hand, Bravo is in the process of extending its strategy to build a national unified communications network, which will use LTE technology. It has recently conducted field trials for LTE applications and solutions, and these have been very successful.

Bravo anticipates that the network will provide it with a huge amount of operational data that can be used to control room operators’ decision-making and event management. In addition, the LTE-based network will provide flexible communications security intervention teams and the public safety teams, simultaneously and in real-time. It could also be used to control drones to cover isolated areas and transfer data from emergency sites at high speed.