Home Office to present ESN review in the summer

During a Public Accounts Committee (PAC) hearing, Joanna Davinson, the Home Office’s chief digital, data, and technology officer, said that the Home Office is now aiming to release its strategic review of the programme to rollout the Emergency Services Network (ESN) at the end of July.

She added that “In that review, we’re working through each of [the programme’s] projects and getting underneath the dependencies and the critical path of each of those projects so we can build our level of confidence in the integrated project plan.

Davinson said that where the programme has had problems in the past had generally been where it lacked enough detail to sufficiently understand the relationships between its different components and that the Home Office is “going through that work now”.

“In addition, we’re looking at alternative approaches to delivery and specifically at how we can get some capability out into the hands of the users early.” She said that this will help build users’ confidence in the programme, gives the Home Office the opportunity to receive feedback during the development process, and means that users who just require data (such as some ambulance users) could get some early benefits from ESN.

Meg Hillier, chair of the Public Accounts Committee suggested that the National Audit Office to conduct another overview of the whole programme as part of its query and the NAO’s comptroller and auditor general, Amyas Morse, was present. Hillier said: “while it is not within my powers to tell [him] what to do, I think he’s heard our suggestion very firmly...”

While discussing the possibility of incremental delivery Davinson said: “Anytime we can get the users to actually touch and feel the solution gives us the opportunity to get feedback. One of the challenges with our current plan is that we do all the design, development and test for everything before we can go into user trials and transition and so we carry quite a lot of risk through that process that by the time we get into trials there are somethings that aren’t quite what the user are expecting. The earlier we can get users to use the components of the system the better.” 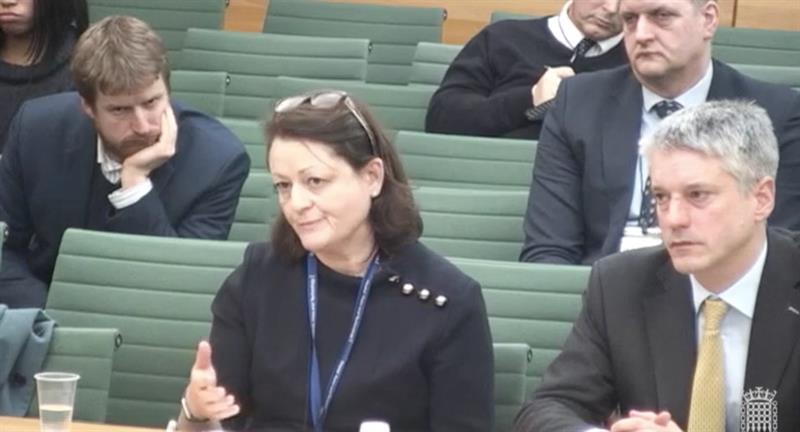 Stephen Webb, senior responsible owner, Emergency Services Network, said that a contract between Vodafone and Motorola Solutions was signed a few weeks ago. It requires Vodafone to provide an IP-based replacement for the TDM service it is looking to withdraw in March 2020 and thereby enable the Airwave network to continue operating while the TDM service is being retired. He added that there has been about six months of testing andthat “We understand that the new solution will be ready in time for that March 2020 date.” Webb also said that while it is a contractual relationship between Motorola Solutions and Vodafone, the Home Office “will absolutely hold Motorola to account to deliver this service,” and that the March 2020 deadline was contractual and as such “we would expect that if necessary [they] would be able to keep it going for a bit longer until they are ready.”

Because of the delay to ESN, which Webb said meant that “the point at which [local police forces] need to start buying [ESN devices] has slipped a little,” he told the committee that the Home Office has been “having some discussions with senior police users recently” on that topic and “a load of work has been done to fleetmap… the collection of devices there are at the moment, what state they’re in, and to what extent there may be extra ones around. There was a lot of over-purchasing [of] devices in the early days of the Airwave contract so there may well be quite a lot that have not be used very much and could be potentially recycled...”

“…It’s an exercise that the police will be doing collectively but we will be supporting [them] on this. We don’t yet know what the scale of the issue is, there are a lot of devices out there, they will obviously start failing, but equally you could potentially buy more ones…”

He noted the cost of procuring new devices falls to local forces and showed the committee and ESN device and said that testing on it has just started and that they “should be ready in a few weeks’ time.”

Shabana Mahmood, MP for Birmingham (Labour) and PAC member, responded, saying: “…It hasn’t slipped a little, it’s slipped a lot and then it’s slipped a lot again, so let’s not downplay the level of slippage here, I think that’s one of the frustrations this committee has had from the start on this project.. You’ve left forces in an impossible position to plan… I’ve got police stations closing in my constituency – the idea that they also can’t plan what little is left of their budgets to work out what equipment they need, you’ve left them in a very difficult position haven’t you Mr Webb?”

Webb answered, saying “I accept that it is difficult [for them to plan]” and again highlighted the value of the fleetmapping exercise.

Moving onto the other aspects of the programme, Webb said that “The EE coverage is broadly compatible with the revised timescale with the original nine month [delay]… The EE side, there are problems in some of the specialist areas or they’re slipping a little bit, but the masts in their general remote areas have proceeded reasonably well…” He added that the specialist areas to be covered by EE include “the various metros that are outside London”.

Webb also said that the Extended Area Services sites are now expected to be completed around the end of 2018, instead of mid-June, which had been required under a previous schedule.

He told the committee that in the months since the previous PAC hearing on ESN in November, the project has made “quite good progress,” but he added that elements of the programme remain challenging, such as some of the details surrounding the in-vehicle solution and the procurement for the air-to-ground solution, which has yet to be launched – “those are things that are yet to be finalised”.

The UK-based 2022 Control Room Awards have been launched, scheduled to take place in Birmingham in September.

Hytera has launched a new PTT over cellular device - the MNC360 - designed for use in the transportation sector.

​Mission critical communications specialist Omnitronics has announced that John Florenca is stepping down as company CEO, to be replaced by VP of ...