MCOP: If you build it, they will come

The next time you pull your Android smartphone from your pocket to download an app, stop and think for a second. While today it seems unthinkable that there wouldn’t be an ecosystem of apps working across a huge range of devices, this didn’t arrive without a great deal of effort.

One of the reasons for TETRA’s great success was the early recognition of interoperability’s importance and end-user organisations’ desire to avoid vendor lock-in. That kind of thinking – the belief that it is better to work together to grow the market rather than fighting for a bigger slice of it – makes a great deal of sense when it comes to a public safety app ecosystem, given both the relatively small size of the mission-critical communications market and the fact that the deployment of mission-critical broadband is at a nascent stage.

Despite 3GPP’s effort to define a complete standardised PS LTE ecosystem, there is not a single unified ecosystem for public safety, with manufacturers and other organisations trying to build their own separate app ecosystems.

This approach is less than ideal for public safety end-users and for application developers. For the latter, it is much harder to work with multiple small ecosystems than one big one as the latter reduces the amount of time and effort required to provide the functionality across multiple devices.

Additionally, testing an app requires there to be a fully 3GPP-compliant ecosystem. This is rather complex as it includes MCPTT application servers, a Release 13-compatible LTE access network with eMBMS capabilities and high-priority QCIs, SIP/IMS Core, PCRF and BM-SC for QPP and multicast. Achieving this requires participation from stakeholders with opposing interests and is only affordable for a few key players.

The Mission Critical Open Platform (MCOP) project is looking to address these issues, and is paving the way towards an open app ecosystem for mission-critical users. Through doing so, it will reduce the barriers to entry for mission-critical application deployment, foster innovation, reduce the need for app developers to duplicate their efforts across multiple proprietary platforms, and make it easier for the public safety community to test and integrate applications. Should it succeed, mission-critical app developers will be able to develop their applications for the open platform rather than those for specific hardware. An open platform will also reduce the amount of modifications that device manufacturers will have to make when integrating them with apps.

The project is led by Spain’s University of the Basque Country (UPV/EHU), together with the TCCA, Expway (a company specialising in evolved multimedia broadcast multicast services – eMBMS) and Bittium (a Finnish manufacturer of ruggedised user equipment), and supported by Nemergent (a group of IT enthusiasts working to foster awareness and technical knowledge of MCPTT). Bittium will validate the integration of the MCOP API onto a real device, while Expway’s expertise in the MBMS service (multicast) is essential given its ability to save air interface resources during incidents where many users come together.

MCOP has received $1.26m in funding from the National Institute of Standards and Technology’s (part of the US Department of Commerce) Public Safety Innovation Accelerator Program (PSIAP) and will run for two years, ending in June 2019. The project’s core objective is to define, develop and validate a mission-critical open platform. This will include different levels of APIs, the Android-based open source implementation of a MCPTT client, a public-safety-specific application, and a live platform in which researchers, developers and other practitioners can test, evaluate and validate their MCPTT-compliant applications.

The steps involved are:

“It’s a bit like the movie Field of Dreams, where Kevin Costner’s character is often misquoted as saying ‘if you build it, they will come’. Ours is a similar model: if you provide people with a platform that they can actually use, then all the stakeholders will come and see what’s happening. That way we’ll foster the use of 3GPP standards on open systems for mission-critical applications – that’s the idea,” says UPV/EHU’s Fidel Liberal, the MCOP project leader. 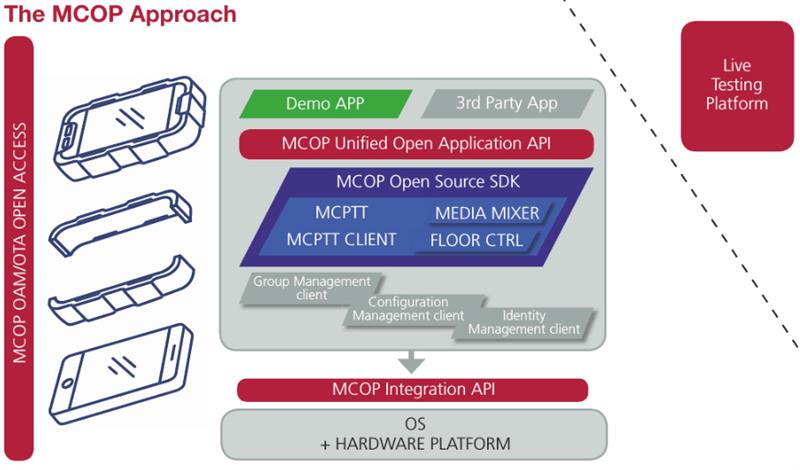 “From the outset, the idea has been to define an API and SDK to isolate app developers and third parties from MCPTT’s insides and low-level details,” says Liberal. “While MCOP was conceived with 3GPP Release 13 in mind, the API definition will be Release-neutral. If there’s any change in the signalling, due to a mission-critical core, for example, then that will be supported by the SDK and the app will still run.” In addition, “by defining the API, we’re making it possible for anyone to provide the SDK. The idea is to define a vendor-neutral API so that anyone can actually provide the SDK and implement it with a wrapper or interconnection mechanism to allow them to support the API as well.”

Because of the project’s focus on Release 13 and the fact that it is part of a research programme entitled ‘Mission Critical Voice’, MCOP won’t initially focus on providing the mission-critical data and video features defined in 3GPP Release 14, but Liberal says it will provide some of these features later.

He says the project highlights MCPTT’s maturity as a technology. “It might seem from the outside that MCPTT is still very young, but we will prove that you can develop innovative apps and there’s no need to wait five years to tender MCPTT capabilities because they’re already available; we’re talking about Release 13 for sure.”

However, at present, 3GPP’s RAN5 group is still working on conformance testing, so there is no way as yet to check compliance with MCPTT in a standardised way. That said, Liberal comments: “We tested this at the first ETSI MCPTT Plugtests event so we are quite sure that we are currently following MCPTT standards and we are also committed to the next Plugtests.”

Markku Korkiakoski, Bittium’s director – sales and business development, adds that the project’s biggest challenges will be “ensuring interoperability between all the providers so that we can build something that is easy enough to use and also fulfils all the requirements at the same time”. He highlights the need to get the main stakeholders involved in the project, as MCOP must be aligned with their requirements.

While the initial MCOP software client is already at a point where it could be made available, Liberal says the plan is to release it bundled with some online testing capabilities to allow developers to be able to fully use it, and that the project expects that it will release this by the end of this year at the latest. “The source code and app have been up and running for a while, but we have decided to release the online testing capabilities and the open source client together at the same time to foster the adoption from the developers and different stakeholders.

“We will support all the standardised calling capabilities and we will also later provide a tailored app that makes use of MCPTT’s capabilities, not just the classic calling application but also a sample app targeting specific first-responders (ie, ambulance drivers), so that on top of these MCPTT capabilities you can also exchange some data, use the messaging mechanism and so on.”

Harald Ludwig, chairman of the TCCA’s Technical Forum, says: “MCOP’s mission-critical API can and should be used. If it were to be included in a country or project’s ecosystem, it would significantly reduce the effort required to develop applications. This will help everybody.”

The French Ministry of the Interior and Overseas Territories has appointed the ‘Package 2 integrator’ in relation to its Réseau Radio du Futur (RRF) ...

Finnish telecoms giant Nokia has announced the development of enhanced versions of its industrial 5G field-router and XR20 smartphones to allow for ...