As the ‘Next Generation 999’ concept is becoming increasingly important to the public safety call-handling conversation Philip Mason speaks to some of the major players facilitating the use of broadband data to contact the emergency services.

Public safety call-handling is currently undergoing a variety of fundamental changes, not least when it comes to the increasing number of ways in which those needing assistance are able to get in contact with the emergency services.

Obviously, this continues to include voice, albeit with members of the public just as likely to use a mobile device as they are a traditional landline. At the same time, however, public safety control centres are also having to take account of text messaging, specialist emergency reporting apps, social media and so on.

This concept is known, at least in the UK, as Next Generation 999.

In 2019, public safety communications professional association BAPCO published a white paper highlighting the issues that it said needed to be addressed in relation to the aforementioned change.

This document was not always, to be fair, completely complimentary of the situation in the UK, particularly when it came to what it referred to as “consistency” between emergency services organisations.

To quote the paper directly, it said: “To get consistency of response across the services there needs to be a clear and agreed roadmap of future development including MAIT [Multi Agency Incident Transfer], AML [Advanced Mobile Location], use of data, video and AI, and the demise of PSTN in 2025. As an example [of the current inconsistency], currently AML is used by all ambulance services, nearly all fire and rescue services, but only about 60 per cent of police forces.”

The paper continued: “It was felt that the government should lay out a clear strategy and roadmap, acting like a private company and considering KPIs, setting clear expectations and focusing on future 999 performance, responses and consistency.”

Unfortunately, it would probably be fair to say that since then not a massive amount has changed in terms of strategy emanating from government. (Huge strides have been made when it comes to MAIT, but that is a topic which deserves a separate article).

This is not to say, however, that the contact solutions themselves haven’t moved on, whether in the United Kingdom or further afield.

With that in mind, this article aims to provide an update on the state of this potentially transformative emergency communications technology, in the first instance looking at the standardisation and interoperability piece. That will be followed with a catch-up with TapSOS, one of the two NG999 user solutions that has been signed off by BAPCO’s app accreditation scheme.

Early spring of this year saw ETSI completing the fourth of its Next Generation 112 (rather than 999) Plugtests, an event designed, in the organisation’s words, to “help ensure efficient, interoperable emergency communications for all citizens”. It included 12 companies testing whether their respective products would work with each other, witnessed by 20 observer organisations.

According to figures released by the standardisation body, the tests achieved an 87 per cent interoperability rate. Unlike previous iterations of the event, however, there were two vital differences when it came to this year.

The first, thanks to restrictions around COVID-19, was that it took place online. The second, far more interesting, difference was that the testing took in not just the Europe but involved the United States as well.

Going into greater detail, chair of ETSI’s EMTEL committee (as well as European Emergency Number Association technical director) Cristina Lumbreras (pictured) says: “This year was unusual in that there were several things running at the same time. The first was the ETSI NG112 emergency communications Plugtest, the first of which took place in 2016. Then in the US, NENA [the National Emergency Number Association] was organising its ICE 9 event, which culminated in the testing collaboration between the US and Europe.

“It was very strange for everyone because of the circumstances, but in the end the transatlantic testing was a great success. We had people from 30 or so organisations in Europe and the US sitting at their computers, sending messages from different tools.

“That was obviously quite complicated in terms of timings, plus we had to make sure that the communications network was secure and so on. We used something called HIVE, which is a router-based interoperability hub.”

For those who don’t know, ETSI runs a variety of ‘Plugtests’, the most high-profile of which in the public safety context look at interoperability between ‘mission-critical’ broadband product components for emergency services users.

While the primary focus of these events was originally mission-critical push-to-talk (MCPTT), the remit now includes ‘MCVideo’ (mission-critical video) as well as ‘MCData’ (missioncritical data).

Regarding the NG112 Plugtests, testing focuses on the various commercial broadband-enabled methods through which the public can now contact emergency services control rooms, whether using voice, text or data.

The transatlantic element of the most recent test, meanwhile, enabled ETSI, EENA and NENA to focus on the crucially important subject of emergency services contact while roaming across borders.

Discussing the testing criteria for the NG112 events, Lumbreras continues: “As with our other Plugtests, the NG112 events have their own set of test descriptions and criteria in order to inform participants that their product is compliant with the standard [known as ETSI TS 103 479]. It is also crucially important to ascertain whether components from different manufacturers can interoperate with each other.

“The idea is to carry out end-to-end emergency communication, beginning with the user device itself. The mobile phone begins the video call or real-time text, which we then test to make sure communication is routing to the most appropriate public safety answering point [PSAP], and that the PSAP can communicate back.”

The recent ETSI Plugtests will likely prove crucial, not only in facilitating public contact with the emergency services, but also to help the global NG112/999/911 market develop and flourish going into the future.

With that in mind, one company which is already helping to steer that market in the UK is TapSOS, which has developed an application to help users contact the emergency services entirely without the use of voice. 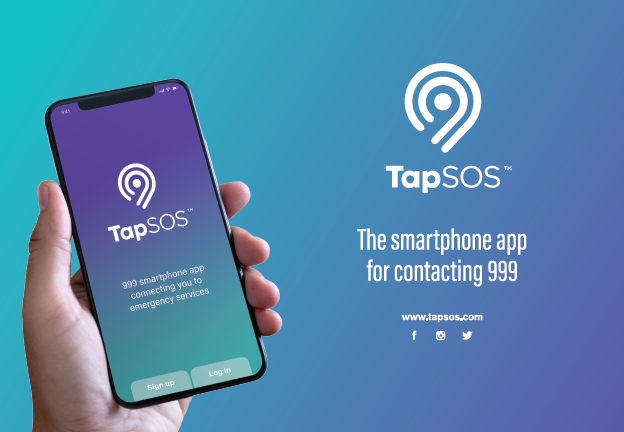 Unlike other eSMS (emergency SMS)- based services, however, the solution is also designed to provide a wealth of auxiliary background information through a series of ‘pre-loaded’ buttons and functionalities.

Since its initial development several years ago, it has successfully gone through the BAPCO app accreditation scheme. It has also developed strong collaborative relationships with a number of UK police forces.

Speaking of this recent progress, TapSOS founder and CEO Becca Hume says: “Following official approval in March 2019, we released it onto the app stores. That said, we didn’t give it an official launch, because we wanted to keep it in a monitored environment.

“We’re currently in the process of refreshing it, although without any changes to the technical side. We’re primarily looking at the design in order to prepare for more users, which means layout, colours, navigation and so on.”

As important as these user-facing changes are, the product’s key moment of evolution likely came when the TapSOS team was advised by BT to base the system on its aforementioned eSMS service. For Hume, while this may limit the parameters of communication, it has made the process of development and rollout immeasurably more straightforward.

She says: “We originally went the EISEC route, to really focus on the user’s ability to send information, but along the way, we were directed towards SMS.

“It just makes things much simpler, for instance in terms of the user onboarding process where all they have to do is sign up to BT eSMS and then give their details. We don’t see any of their personal information as a company. That’s just for the emergency services.

“In terms of actually sending an alert, it’s all icon-based, again to make things as easy as possible during what could be an incredibly stressful situation. We ask the user four things: which service they require, the nature of the incident, confirmation of address, and then specific details to help with triage.

“We ask if there’s anyone who’s not breathing, if there are any serious bleeds and so on. All they need to do is press ‘yes’, ‘no’ or ‘don’t know’.”

Going back to the subject of interoperability, the decision to leverage SMS has also made the process far less complicated from the point of view of those receiving the information.

Once the user has sent their message, it simply comes straight through to the BT operator, who literally reads it out to the appropriate emergency service over the phone. As is probably obvious, this means that no integration with any public safety backend system is required.

The TapSOS app has clearly undergone considerable evolution since its inception, both in terms of the user interface and the technology sitting behind it.

According to Hume, however, yet more changes are also currently taking place, this time around the identity of the solution itself.

“TapSOS was initially intended to enable people who were deaf or hard of hearing to contact the emergency services without using voice,” she says.

“But as the pandemic has continued, it has also become obvious that there are other users who desperately need to have access to the functionality, such as victims of domestic abuse.

“We’ve realised that the app in its current form wouldn’t necessarily be suitable, because what it does is so obvious. So we applied for funding, which has allowed us to create a second app – approved this March – containing exactly the same functionality as TapSOS but completely anonymous.

“It’s disguised on the user’s phone and will only be made available to those who have gone through domestic abuse and are already known to the police and victims’ groups.”

The ongoing development of NG999, both strategically and in terms of the technology, is a fascinating subject for those with an interest in public safety communications.

Registration has opened for the 2022 BAPCO Conference & Exhibition, taking place in March of this year.

Critical Communications, We are DIRECTORIA business directory, currently, we are in the process of including new companies on our website. We have recently listed Critical Communications on our directory (for free). This is an excerpt of the listing: "Since 2011 his focus has expanded to cover industry strategy and market development activities for mission critical mobile broadband technologies, working closely with TCCA’s Critical Communications Broadband Group (CCBG) where ..." You can take a look at the full listing  here: -- https://directoria.co/critical-communications If you want to remove it click here: https://directoria.co/remove?ppc=YUVvdWhrMUtRVCtHa2ZyLzZqRms0dU5TbERnSlNQcz0= If you want to  make any changes, please, "claim your listing"  by clicking on widget on the right sidebar of your listing. Thanks. Directoria Team.

Hi, I want to contribute high-quality content to your website in form of a guest post through a simple 3 step process. 1. I will send three amazing topic ideas that are up to the trend and your readers' interest 2. You need to choose one topic out of those. 3. I will then send a high-quality, plagiarism-free article on that topic. You will just have to publish it with one do-follow backlink to my website. It will be a win-win. Please let me know if we shall start with step 1? Regards, Ryan Wilson